Glaucoma is a general name for a group of eye diseases that damage the optic nerve of the eye. Glaucoma prevents the eye from sending accurate visual information to the brain. 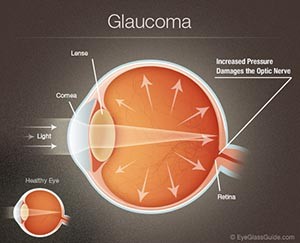 In addition, people with a family history of glaucoma stand at a higher risk to develop the disease, and anyone over age 60, particularly Mexican Americans, faces an increased risk of glaucoma.

Glaucoma is often called “the thief of sight” because glaucoma symptoms either go undetected or develop slowly over time. Glaucoma usually starts by attacking the outside of your vision. Left untreated, glaucoma can lead to complete blindness in one or both eyes.

Glaucoma typically affects your peripheral vision first. This is why it is such a sneaky disease: You can lose a great deal of your vision from glaucoma before you are aware anything is happening. If uncontrolled or left untreated, glaucoma can eventually lead to blindness.

Glaucoma is currently the second leading cause of blindness in the United States, with an estimated 2.5 million Americans being affected by the disease. Due to the aging of the U.S. population, it’s expected that more than 3 million Americans will have glaucoma by the year 2020.

Glaucoma is often referred to as the “silent thief of sight,” because most types typically cause no pain and produce no symptoms. For this reason, glaucoma often progresses undetected until the optic nerve already has been irreversibly damaged, with varying degrees of permanent vision loss.

But there are other forms of the disease (specifically, acute angle-closure glaucoma), where symptoms of blurry vision, halos around lights, intense eye pain, nausea, and vomiting occur suddenly. If you have these symptoms, make sure you immediately see an eye care practitioner or visit the emergency room so steps can be taken to prevent permanent vision loss.

Source: Glaucoma article by AllAboutVision.com. ©2009 Access Media Group LLC. All rights reserved. Reproduction other than for one-time personal use is strictly prohibited.

Please note: We are closed all Statutory Holidays and Long Weekends.